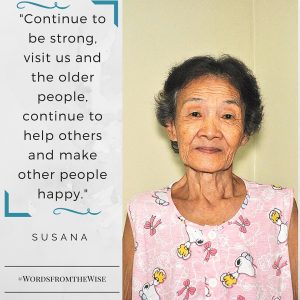 I’m originally from Santa Lucia, Ilocos Sur. I grew up there till I was about 15 before I came here to Manila. I got married here as well. I’m new here at Little Sisters; I’ve stayed for less than a month. My two previous employers brought me here. They’re sisters who are studying in Bacoor. They found me in a basketball court in Bacoor, I was picked up there. I had a cough and a fever because it was raining. I was wet from the rain so my fever got worse then. I told them to just bring me to the government, but they told me it was going to be alright until they brought me here. Before coming here, I worked as a maid for their family for a while. I used to work for their grandmother who is staying in Laguna, but it’s far and it gets lonely so I didn’t like it there. They asked me to just stay at their house in Bacoor where the two sisters lived in before. Every Saturday, their mother comes home from Mindoro. I was approved to be there with them. I was paid 500 a week and was given food in exchange for doing housework. They’re really nice but I’m worried they won’t visit me here since their mom visits every weekend. The two girls are going to school. The eldest is 27 and the other is about 20 – studying electronics. Our house in Bacoor caught fire, it was a Sunday and I went to mass at 5am. When I got to the church, I heard fire trucks. It was loud and the mass hadn’t even ended yet. When I went home, the apartment wasn’t there anymore. I don’t know where my employer is. Since they brought me here they haven’t visited. I´m the one that´s trying to find them, they aren’t trying to find me.

My life has been difficult. I used to live in the squatters area in Araneta. I almost got killed twice from the flood during Ondoy. It was raining on a Monday and it didn’t stop until the next day. By the water had already reached the 2nd floor. I still didn’t call for help at that time. My neighbors weren’t there anymore so climbed up to the 3rd floor. The entire house was flooded, I didn’t get to eat or sleep. I couldn’t ask anyone for help. I only had my bag with some of my clothes. I tried to get out from the roof and the rescuers were able to see me. They tied a rope around my waist to pull me out of the area. I was then brought to a Chinese factory but they did not have any food. We lasted 5 days without food. I was already shaking. Soon after, the people from the barangay came and gave us food but I couldn’t eat the food. The rice didn’t taste like anything and the sardines wasn’t nice as well. There were people who gave us bread so that’s what I ate. They gave us clothes because we didn´t have anything left. The house was gone, we lost our clothes, and we lost everything. I was alone that time. Unfortunately my son was not around so he wasn’t with me during that incident. I don’t really see my children anymore. Now that I’m old, they just give me food. I have 5 kids, 3 girls, 2 guys. My eldest is a boy. They all live in Bulacan now, but we used to live together here in manila.

I had 5 children; 3 girls and 2 boys. They´re supposed to be in Bulacan but I don’t know where. My life is lonely right now. I get jealous of the other people here because they get visitors who bring them food, and some even get allowance. Those who visit buy their other lolas milk and other food. We can’t avoid that sometimes we have certain requests. I get sad when I’m hungry. The time gap for our eating time is a bit big and I get hungry easily. Sometimes I get so hungry that my knees start to shake. I don’t tell the nuns, I just wait for our next meal. I just endure it. But if I had money, I would be able to buy some food of my own, like pandesal during the morning. Don’t get me wrong, the sisters are providing us with everything. I need to drink my meds too so I can’t really eat a lot either. It’s so hard to be old with my condition. I tried to get along with my grandchildren in the past but they´re mataray.

I never got to study; I went to school but only up to grade 1 elementary and then parents asked me to stop my studies so that I can be a nanny here in Manila. I grew up being a nanny for my sister. When I was younger I was taken in by her. I was 12 at the time. My older sister was married to a Chinese-Filipino man from here and they took me in. I didn’t last too long because my sister was really harsh. My sister and I didn’t get along well even if I was the nanny of her children. But even so, she still didn’t treat me well. I left them when a friend of mine got me a job as a nanny in Gandara, Samar. My mother asked me to come back to Ilocos but then I went back here in manila when I was 16 to work again as a nanny. Again, I didn’t last that long with my new employer because she was also strict with me. After them, I got employed by a Chinese family. I wasn’t even allowed to go out of the gate of the house but they were nice to me at least.

I´m scared because if the sisters ask me to leave here, I don’t have anywhere else to go. We don’t have our house in Ilocos anymore and my sister has already passed away. I’m the youngest and I’m the only one left. There won’t be anyone else to help me outside so it will be hard for me. If I do anything wrong here, they might ask me to leave this place. It would be hard for me to get food, and be out in the sun or in the rain, or on the streets. I don’t mind dying just so it can end.  I can’t help but remember all the hardships I’ve been through, good thing there are good sisters that are trying to take good care of us. You too! You’re visiting us, which means we still have some worth. Because outside we´re meaningless. I’m happy when people visit me just like you, because I feel like I have worth, I have someone to talk to and be entertained. Many times, I’m alone and I feel lonely. I’m shy so I haven’t gotten along with the other people because gossip spread around that I have a contagious disease. But I only came here with colds and fever and I’m okay now.